Our Singapore sons are getting more pamper as the times change in Singapore. But I am not against the army recruits using Yoga mat to do sit up anywhere. The training grounds may be hard and uneven which may leave marks or bruises on their skin. 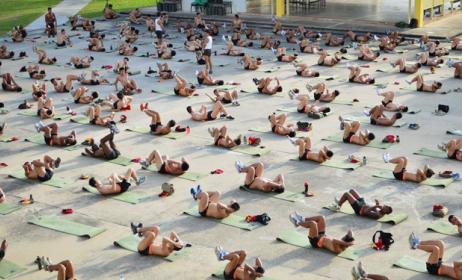 This leaves Singapoeeans angry as for the past 40 years or more, we had gone through the hard way. Others will call us a sissy for even putting a cloth on the ground to do sit up.

This was a wrong approach by the Basic Military Training Centre to show the world our soldiers doing sit up on Yoga Mat. Tax payers had to pay for thousands of Yoga Mat yearly.

Are the Yoga Mat branded?

The Singapore School Holidays 2010 has been released and you can made use of these to plan for your holidays or any other things.

Long Weekend for Families
National Day Holiday
Enjoy a long weekend on Singapore National Day where your kids will be off from 7 August 2010(Saturday) to 10 August 2010(Tuesday). But you need to take leave as 10 August 2010 and is a schedule school holiday only. But if you working in MOE Schools then you are probably excluded from taking leave since school are not opened.

Are u buying a HDB Resale Flat? HDB Flat will be your biggest investment and assest in your entire life. Buying a flat near the MRT will help you to save on transport cost and travel time. If you have the extra spending power, do keep this in mind. Flats near MRT are easy to sell and have higher market value.

HDB Resale Flat is just like a bidding process on Ebay where the highest bidder will get the flat. You need to work out yourself or with a real estate agent on how to secure a flat within your spending limit. You must take note that PRs are willing to pay higher prices to secure a flat as monthly rental are eating into their cash layout monthly. Do your sums right and not to compete with them if it will blow your budget.It is best that you just need to use CPF to cover the loans without the need of doing cash top up.

An Engineer in the Day and Tech Cruncher at Night.